Large dust or sand storm hit the western part of the Middle East. On Monday, a dust storm covered Syria and on Tuesday morning the sand spread to large areas of the region. Lebanon, Israel, Turkey and Cyprus were also affected. The Meteorological Service of Cyprus declares that the dust storm has spread to Cyprus from Syria and will last until the end of the week.
What is the cause of the sandstorm in Cyprus?
Strong concentration of dust in the air is the result of convection currents created by intense heating of the land in Africa. With strong heating, sand rises in the air and the Sahara winds are strong enough to move even the dunes! As the result, the sand can move for thousands of kilometers.
Thus, homeowners in Cyprus, especially in its western part, suffer from sand storms that come from Africa. Saharan dust and sand can be very damaging, as often the dust stays in the atmosphere for several days. As the result, the flights can be cancelled. Usually the dust storm do not pose a threat to healthy adults, however people are advised to stay indoors, especially those with weak lungs or who have predisposition to asthma. There is an additional danger to smokers. 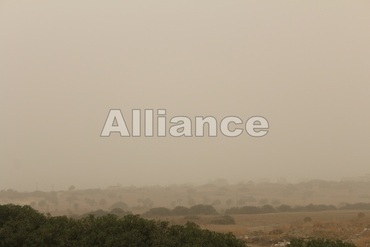