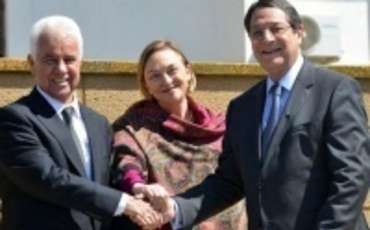 President of Northern Cyprus, Dervis Eroglu after three hour meeting with the leader of South Cyprus, said that difference of opinions in the administrative matters of Cyprus prevails over possible progress in the negotiations.

Mr Eroglu said that political equality is a crucial issue for the Turkish Cypriots, adding that the president of Southern Cyprus, Nicos Anastasiades and his team have a different opinion about the political authority and leader election of united Cyprus.
"The Greek side wishes to see Greek Cypriot president, with Turkish vice-president. However, we do everything possible to achieve residual resolution of the Cyprus problem, and will continue to defend our rights at the negotiating table "
UN Special Advisor for Cyprus, Lisa Buttenheim, said that the meeting between the leaders was productive and sincere. The next two meetings will be held on June 23 and July 7.