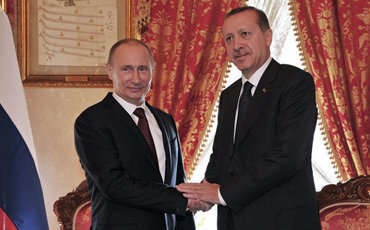 Although Turkey and Russia do not have the same strategic vision of the Middle East, which puts an existing relationship under a certain degree of risk, the visit of Russian President Vladimir Putin to Turkey this week to discuss the growing crises in Syria, is the symbol that each side is trying to maintain bilateral relationship. Putin traveled to Turkey on Monday after nearly two months of a busy schedule of social events and trips. He met with Turkish president Recep Tayyip Erdogan to discuss primarily the corresponding position on Syria. Despite their differences on Syria, Russia and Turkey have strong economic ties, which were a major topic on Monday. To reinforce the close economic cooperation 11 more agreements on cooperation were signed between the countries. "Russia is the main market for Turkish construction companies, and Turkey is a paradise for Russian tourists (more than 3.5 million Russian tourists visited Turkey last year), Turkey needs Russian natural gas, and Ankara would do everything possible to prevent any split with Moscow. " Trade between the two countries, whose turnover amounted to $ 32 billion last year, is expected to grow to $ 100 billion in the coming years. Among other projects, Russia is building Turkey's first nuclear power plant.
660
04.12.2014

Grants, agricultural grants and investment support project in accordance with the Agreement on Economic and Financial Cooperation

The Office for Development and Economic Cooperation (BSEC) of the Turkish Embassy in Nicosia has provided a grant of 500 thousand Turkish lira to 27 livestock breeders to purchase the necessary equipment for the transition to the cold chain.

PCR And Antigen Tests No Longer Free From 1 September

Prime Minister Ersan Saner said that from September 1, PCR or antigen tests for Covid will no longer be free of charge. The cost of a PCR test will not exceed 100 TL and 40 TL for an antigen test.