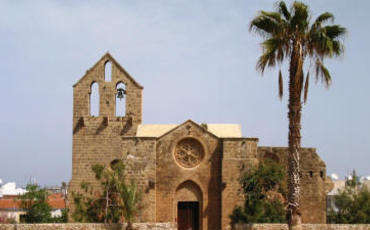 For the time in 57 years service took place in the Nestorian Church in Famagusta. Attended by 1,000 people, the service was held on 8th of December. Brochures describing the history of the building were available in English, Greek and Turkish. Construction of the church began in 1359 and it is one of the best preserved churches in Famagusta. In attendance were both mayors of Famagusta, of the Turkish and Greek side. Several TV channels were filming the event, including National Geographic. On Tuesday, the Turkish mayor of Famagusta Kayalp Oktay and his Greek counterpart , Alexis Galanos , held a press conference during which they shared views and hopes for the future of Cyprus , which, in their opinion, should be reunited , and the port of Famagusta open to international trade under supervision of the European Union.