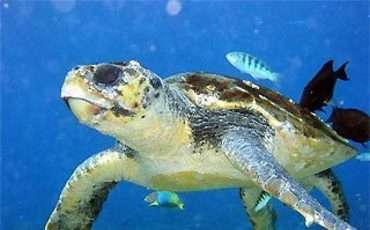 Beaches of Northern Cyprus have again become hosts for sea turtles. Experts have found 15 nests in total of Loggerhead turtles. Seven nests were found in Alagadi, six on the beaches of Tatlisu, and two on the coast of Guzelyurt. It is expected that another species of sea turtle, green turtle, will begin to lay eggs in the near future. Sea turtles are choosing only the most eco-friendly places to lay their eggs.
Foreign volunteer from UK and Australia have already arrived to North Cyprus, in order to monitor the safety of nests, and help the small, newly hatched turtles reach the sea in late summer. Everyone can view the hatching of the little turtles in Alagadi in late August and early September. For detailed information and work as a volunteer, contact Turtle Project under number 0548 8710639.