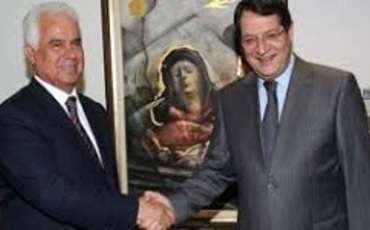 While president of Northern Cyprus gave positive statement after meeting with the leader of the Greek Cypriots, Nicos Anastasiades, expressed a different opinion.
Northern Cyprus President met with President of the Republic of Cyprus on Monday, November 25, the first time without the presence of the United Nations. Unprecedented and informal meeting lasted for three hours on a territory of the buffer zone.
TRNC President Dervis Eroglu, began his statement offering his condolences to Greek Cypriots after the death of the former leader Glafcos Clerides. The President stressed that they have moved forward with Mr. Anastasiades and the Turkish Cypriot side is ready to start negotiations and they presented their position before officials of Southern Cyprus. He said that Mr Anastasiades asked for joint statement to begin negotiations, and eventually it became a prerequisite. The President added that the Special Representative of Northern Cyprus has worked on a joint statement from the beginning of June, but these efforts have reached a deadlock. TRNC leader explained that the reason for no announcement of a joint statement was the Greek side, which intends to incorporate complex issues in the declaration. The President also said that they offered new solutions in order to overcome the difficulties, and that they even offered to start discussion on "Management and the separation of powers" once again.
Mr Eroglu also told reporters that he had invited the president of South Cyprus to visit together Andreas Monastery, thus provide a positive signal to the people. The President also reiterated his desire to begin negotiations, and said he was ready to do it as soon as Mr. Anastasiades returns from his trip.
At the time, as the President's speech of Northern Cyprus was budding, the Greek Cypriot leader said: "I took the initiative for today's informal meeting with Mr. Eroglu to find out whether we can conclude a joint declaration that will pave the way for the solution of the Cyprus problem.
It was a very useful meeting, which allowed both parties clearly understand both each other's positions, and the reasons for the failure to sign the joint statement.

Unfortunately, there is still a long way to go until we reach the desired result, which will allow the resumption of dialogue between the leaders of the two communities.
We intend to continue consultations between representatives of countries whose ultimate goal is the conclusion of the Joint Declaration and the resumption of negotiations. "