First turtles of the season in Cyprus 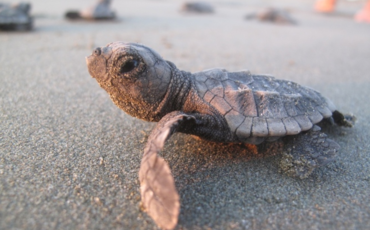 On Thursday in North Cyprus the first turtles hatched from nests on the beach Güzelyalı in Karsiyaka. The total of 81 small turtles hatched from eggs, even without the help of many volunteers. Tricia Dunn, of the Association for the Protection of Turtles in Northern Cyprus (SPOT), commented: "After 50 days after the big turtle laid eggs, small turtles are ready to get out of the nest and live independently in the sea. On Thursday, 81 turtles hatched from 87 eggs, 60 of which are now in the sea. The remaining eggs we took under our care, hoping that they will fertilize and hatch, and then we'll let them into the waters of the Mediterranean. "
Meanwhile, the beach Alagadi, also known as "Turtle Beach" has broken all previous records for the number of turtle nests, the number of which this year reached 207. Marine Turtle Research Group determined that 142 nests belong to the species of green turtles and 65 turtles loggerhead turtle.