Erdogan: "Troops will not be withdrawn from TRNC” 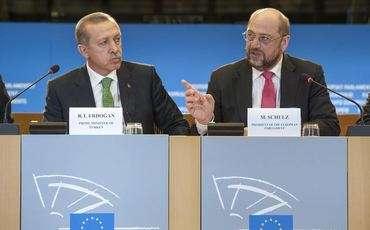 Speaking at a joint press conference in Brussels on Tuesday with the President of the European Parliament, Martin Schulz, Turkish Prime Minister Erdogan said that Turkey has always supported and continues to constructively support the TRNC in the Cyprus settlement. Erdogan said: "We believe that Greece, as guarantor of South Cyprus should also support this process in the same order. In particular, our principle is based on the existence of two states in Cyprus."
Turkish Prime Minister said that the negotiations should be conducted with goodwill and noted that the Greek government should not avoid negotiations. Touching on the issue of Turkish troops in Northern Cyprus, Mr. Erdogan commented: "We were told today about the withdrawal of troops from Cyprus. We did not listen to such a proposal in the past, and will not listen now. It was in Annan's plan. While we accepted the plan, the Greek Cypriots rejected it. "
Martin Schulz said that the Republic of Cyprus joined the European Union, and thus is now is representing entire island. Mr. Erdogan said that the South Side is not the whole of Cyprus, and added that, in accordance with EU legislation, none of the countries with internal problems can join the European Union. Erdogan continued: "Besides, Cyprus is divided by the Green Line, and South side has no right to represent Northern side. This is contrary to European law. So why are we conducting these negotiations? Ignoring the Turks in North Cyprus and South Cyprus posing as the owner of the entire island, we do not measure fairness in terms of international universal values. Now, unfortunately, there is a desire to condemn the TRNC into oblivion by force. Why did we conduct these meetings in Birkenstock in Switzerland? During these meetings, we have reached the final point, even when South Cyprus was not an EU member. After the meetings, a referendum was held. TRNC has kept its promise on a referendum. North Cyprus voted "yes" for the Annan plan, while 75% of Greek Cypriots voted "against." Those who said "no" were rewarded, while those who said "yes" were not accepted in the EU. If my esteemed friend Schultz reads a book written by former German Chancellor Schroeder, he would see the chapter in which the Chancellor explains how unfair the decision was about Cyprus "
Following a statement by the Prime Minister, Schultz said that they should avoid public quarrels and added: " We must find a reasonable solution " to the Cyprus problem. He said that he understands the position of Erdogan on this issue, but added: "The entire island entered the EU. Accept this situation."